What Does RDC Mean?

RDC means "Really Don't Care." The abbreviation RDC indicates total dismissal of someone or something and indicates that the sender has no interest at all in the situation.

RDC is one of many abbreviations used to indicate a lack of interest. Others include: In 2013, American singer Demi Lovato wrote and performed a song entitled "Really Don't Care." It featured English singer Cher Lloyd and catalogued the break-up of a relationship.

When I write RDC, I mean this: 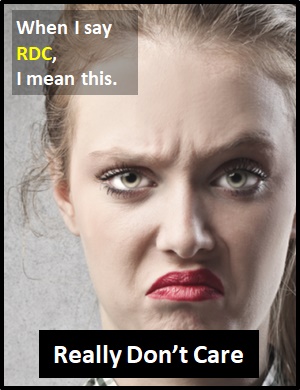 Examples of RDC in Sentences

Here are examples of RDC being used in conversations:

An Academic Look at RDC

Before the digital era, we would have said something like "I really don't care " instead of using the abbreviation RDC.

Example of RDC Used in a Text