What Does RFYL Mean?

RFYL means "Run For Your Life." The abbreviation RFYL is typically used humorously as a recommendation to someone to get out of a relationship or away from a situation as quickly as possible.

Although the abbreviation RFYL is typically used humorously in text messaging, the phrase "Run For Your Life" can have very serious connotations. A song entitled "Run for Your Life," which was recorded by the Beatles for their 1965 album Rubber Soul, was widely criticised for its misogynistic message. Also, "Run for Your Life" was the title of a 2014 American TV movie based on a true story about a Canadian woman who escapes with her children from her abusive husband. When her ex-husband finds her, she must choose between killing him herself, hiring someone to kill him, or disappearing again.

When I write RFYL, I mean this: 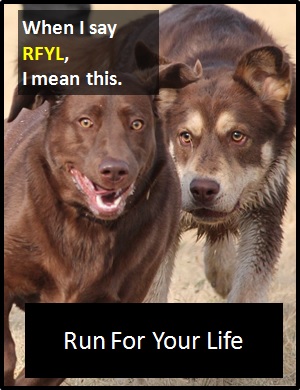 RYFL may be the most appropriate course of action here!

Examples of RFYL in Sentences

Here are examples of RFYL being used in conversations:

(Here, RFYL is being used humorously.)

(Here, RFYL is being used literally to mean someone is potentially in danger and needs to escape quickly).

An Academic Look at RFYL

RFYL is typically used as an imperative (i.e., an order).

Before the digital era, we might have just said "Run For Your Life" instead of using the abbreviation RFYL.

Example of RFYL Used in a Text

DUSS (To Run Away) GR (Gotta Run) SCRAM (Run Away)