What Does RHI Mean?

RHI means "Rumour Has It." The abbreviation RHI is used to make it clear that what has just been said is only based on rumor, gossip or hearsay. It emphasizes that the information may be untrue or at least partially incorrect.

"Rumor Has It" is the title of a 2005 romantic comedy starring Jennifer Aniston and Kevin Costner. It was also the title of a song released by UK singer Adele in 2011.

When I write RHI, I mean this: 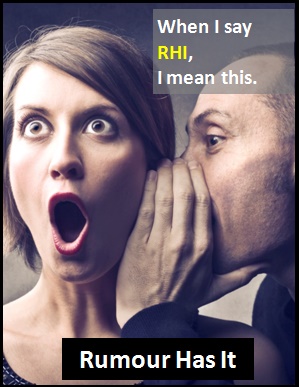 Rumor is often sparked by gossip or hearsay.

Examples of RHI in Sentences

Here are examples of RHI being used in conversations:

An Academic Look at RHI

As it is pronounced using its individual letters (i.e., "Ar Aitch Eye"), RHI is classified as an initialism abbreviation. Initialisms are different to acronyms, which are spoken like words.

RHI can be used as a standalone declarative sentence (i.e., a statement). It is not always used as another part of speech within a wider sentence.

Before the digital era, we would have just said "Rumour Has It" or something like "A Little Birdie Told Me" instead of using RHI.

Example of RHI Used in a Text