What Does RLF Mean?

The abbreviation RLF is used with the meaning "Real Life Friend" to refer to a friend who is seen face-to-face, as opposed to a relationship which exists only online (e.g., on Facebook). Friendships can take many forms, but RLFs are considered the best, because closer bonds can usually be forged in person.

When I write RLF, I mean this: 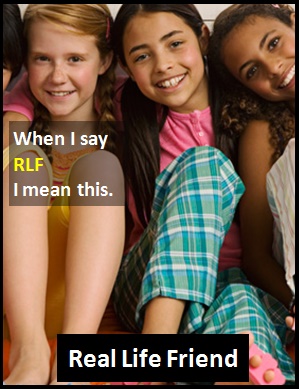 It's nice to have RLFs.

Examples of RLF in Sentences

Here are examples of RLF being used in conversations:

An Academic Look at RLF

As it is pronounced using its individual letters (i.e., "Arr Ell Eff"), RLF is classified as an initialism abbreviation. Initialisms are different to acronyms, which are spoken like words.

Before the digital era, when we might have had "Pen Friends," we would have just said "Real Life Friend," instead of using the abbreviation RLF.

Example of RLF Used in a Text