What Does RME Mean?

The abbreviation RME is used with the meaning "Rolling My Eyes." When used in direct response to a statement by another person, RME usually indicates good-natured scepticism or mock annoyance. However, when used to refer to the actions or statements of a third person, RME often indicates disbelief, exasperation or irritation.

When I write RME, I mean this: 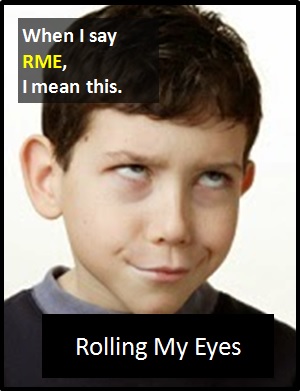 RME can be a good-natured jibe, or a sign of genuine irritation.

Examples of RME in Sentences

Here are examples of RME being used in conversations:

An Academic Look at RME

RME is typically used as a standalone declarative sentence (i.e., a statement). It is not normally used as another part of speech within a wider sentence.

Before the digital era, we might have said something like "Here We Go Again" or "Yeah, Right" instead of using the abbreviation RME.

Example of RME Used in a Text