What Does RPG Mean?

The abbreviation RPG is used in gaming to refer to "Role-Playing Game." In this context, RPGs are games in which players act out the roles of characters in a fictional setting. RPGs can be table-top games or digital games. The digital versions are usually played online.

An RPG is also a shoulder-fired, anti-tank weapon system that fires projectiles equipped with an explosive warhead. The term "Rocket-Propelled Grenade" was coined in English to match the Russian language abbreviation for the weapon, which is Raketniy Protivotankoviy Granatomet.

RPGs with high-explosive anti-tank warheads are highly effective against lightly armoured vehicles such as armoured personnel carriers. However, heavily armoured vehicles, such as main battle tanks, are generally too well protected to be penetrated by an RPG round.

Cheap and easily available, RPGs are still being used widely in conflict areas such as Afghanistan and Syria, where they have proved to be most effective against helicopters. Taliban fighters used RPGs to shoot down US helicopters in June 2005 and August 2011, and Somali militiamen used them to shoot down two US UH-60 Black Hawk helicopters during the "Battle of Mogadishu" in 1993.

When I write RPG, I mean this: 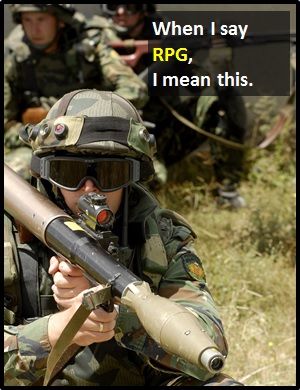 The image shows a soldier preparing to fire an RPG.

Examples of RPG in Sentences

Here are examples of RPG being used in conversation:

An Academic Look at RPG

RPG is an initialism abbreviation. This means it is pronounced using its individual letters (i.e., Ar Pee Gee). Initialisms contrast with acronyms, which are spoken like words.

Example of RPG Used in a Text