RTHX (Retweet Thanks) is used to thank someone for retweeting one of your tweets on Twitter.

RTHX is an amalgam of RT (Retweet) and THX (Thanks). Occasionally, it is seen as RTTHX or RT THX, but usually the Ts are amalgamated.

When I write RTHX, I mean this: 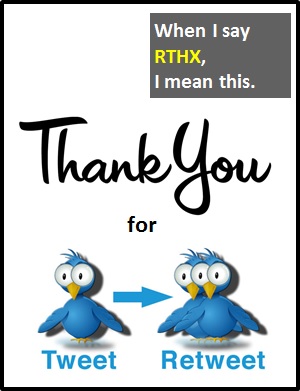 RTHX means "thanks for the retweet." Grammatically, RTHX is a portmanteau abbreviation (and that's rare!).

Examples of RTHX in Sentences

Here is an example of RTHX being used on Twitter:

An Academic Look at RTHX

RTHX is used as a standalone declarative sentence (i.e., a statement), which translates best as "I thank you for your retweet." In other words, it is not used as another part of speech within a wider sentence.

Example of RTHX Used in a Text