What Does SBD Mean?

SBD means "Silent But Deadly (Breaking Wind)". The abbreviation SBD is used with the meaning "Silent But Deadly" to refer to a fart (i.e., passed wind) that has been released very quietly, but is insufferably smelly. Some people specialise in the "art" of releasing SBDs in the company of unsuspecting friends, or even in crowded places. Others discover to their horror that the fart that they hoped to sneak out discreetly to relieve stomach distress turns out to be an SBD.

Unless the perpetrator of an SBD is amongst friends and is proud of their foul deed, it is usually impossible to determine who was responsible. In a public place or amongst strangers, most people will just bear the smell and refrain from comment. However, in circumstances in which the foul odour can be acknowledged (or is so foul that it cannot be ignored), everyone will typically make a big show of holding their noses and waving their hands around to dispel the stench, hoping to make it clear that they were not responsible.

When I write SBD, I mean this: 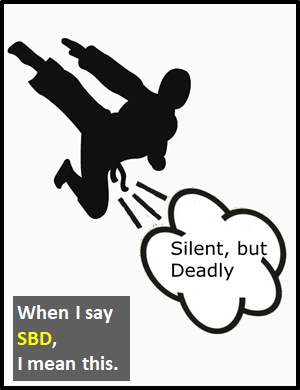 SBDs are the ninjas of flatulence.

Examples of SBD in Sentences

Here are examples of SBD being used in conversations:

An Academic Look at SBD

As it is pronounced using its individual letters (i.e., "Ess Bee Dee"), SBD is classified as an initialism abbreviation. Initialisms are different to acronyms, which are spoken like words.

Of note, even though it starts with a consonant, the abbreviation SBD attracts "an" when spoken as an initialism because the first sound (Ess) is a vowel sound.

The use of the abbreviation SBD to describe a "Silent But Deadly" fart long pre-dates the digital era.

Example of SBD Used in a Text