SG2M means "Sounds Good To Me." The abbreviation SG2M is used as an affirmative response to a question or proposition.

When I write SG2M, I mean this: 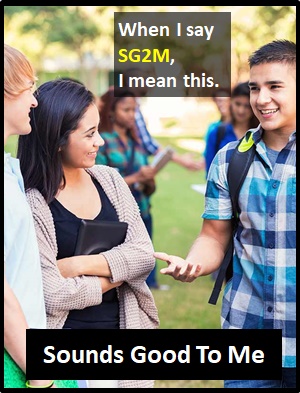 Examples of SG2M in Sentences

Here are examples of SG2M being used in conversations:

An Academic Look at SG2M

SG2M is defined as a cyber term because some of its characters are used as substitutes for letters. Most cyber terms were introduced to reduce the number of key strokes required to write the word, but since the arrival of predictive texting and keyboards on mobile devices, this efficiency is no longer required.

"Sounds Good To Me" is normally used as a standalone declarative sentence (i.e., a statement). It is not often used as another part of speech within a wider sentence.

Before the digital era, we might have just said "Sounds Good To Me" or something like "I'm happy with that" instead of using SG2M.

Example of SG2M Used in a Text