What Does SHADE Mean?

SHADE means "Disrespectful." The term SHADE is typically accompanied with the verb "to throw." Someone that "throws shade" is publicly criticizing or expressing contempt for another person.

Until recently, the word SHADE was mainly used in the gay community and in drag queen culture. However, in recent years it has become much more mainstream.

The first known use of SHADE was in the documentary film "Paris Is Burning" (1990), which is based on the Manhattan drag scene in the 1980s.

When I write SHADE, I mean this: 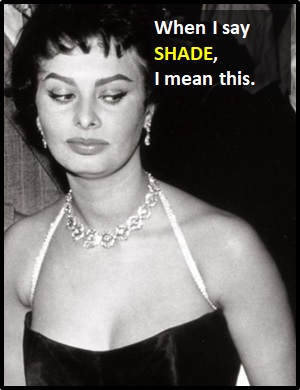 Examples of SHADE in Sentences

Here are examples of SHADE being used in conversations:

An Academic Look at SHADE

SHADE is typically used as a noun (i.e., a naming word). For example:

(Here, SHADE is being used as a noun.)

Example of SHADE Used in a Text

SHADE
Help Us To Improve Cyber Definitions
Please tell us using this form.