The word SKENG was originally used with the meaning "Blade" or "Knife." However, it is now widely used to refer to a "Weapon" of any kind, including a firearm.

SKENG is commonly used in rap songs, including the 2019 track from British rapper Stormzy "Sounds Of The Skeng" (see video).

When I write SKENG, I mean this: 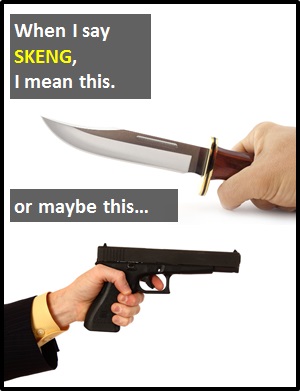 SKENG originally meant knife, but now can mean any weapon.

Examples of SKENG in Sentences

Here's an example of SKENG being used in song lyrics:

An Academic Look at SKENG

The word SKENG is a noun used in Jamaican gangster patois. It may derive from the merging of the words "Short" and "LENG." In which case, it could be considered a portmanteau word, which is the term for when two words are merged into one. (SPEXY (from spectacles and sexy) is another example of a portmanteau word.) However, SKENG would not be a true portmanteau word because the letter K has been added to aid pronunciation.

Before the digital era, we might have said something like "Blade" or "Shooter," instead of using SKENG.

Example of SKENG Used in a Text