SLFN means "So Long For Now."

The abbreviation SLFN is used with the meaning "So Long For Now" as a sign-off to end a conversation. SLFN is similar in meaning to abbreviations such as BFN (Bye For Now) and CFN (Ciao For Now).

The origin of the phrase "So Long" as a form of saying goodbye is disputed, but it is widely believed to be a corruption of Hebrew or Arabic greetings. The inclusion of "For Now" implies that the absence will be of a temporary nature.

When I write SLFN, I mean this: 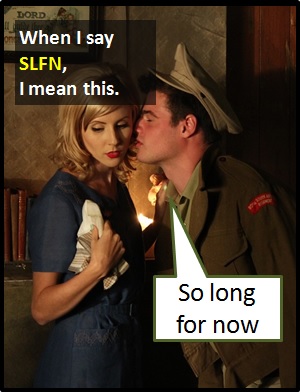 Examples of SLFN in Sentences

Here are examples of SLFN being used in conversations:

An Academic Look at SLFN

As it is pronounced using its individual letters (i.e., "Ess Ell Eff Enn"), SLFN is classified as an initialism abbreviation. Initialisms are different to acronyms, which are spoken like words.

SLFN is typically used as a standalone declarative sentence (i.e., a statement), meaning "So Long For Now." It is not normally used as another part of speech within a wider sentence.

Before the digital era, we might have just said "So Long For Now" or something like "See You Soon" instead of using the abbreviation SLFN.

Example of SLFN Used in a Text