What Does SNU Mean?

The acronym SNU is used with the meaning "What's New?" as a greeting or as a question. SNU is based on the similarity of the sound made when saying "What's New" to that made when pronouncing SNU as a word.

When used as a greeting, SNU is similar in meaning and usage to asking "How are you?" or "Alright?". It is sometimes just a way of saying hello and does not always require a detailed answer.

When I write SNU, I mean this: 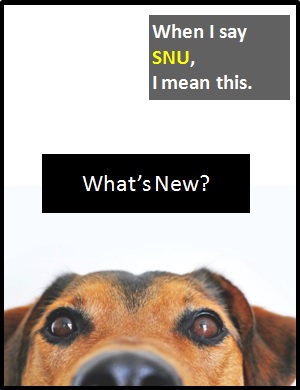 SNU is another way of saying "Hello, what are you up to?"

Examples of SNU in Sentences

Here are examples of SNU being used in conversations:

An Academic Look at SNU

SNU is an acronym (i.e., an abbreviation spoken like a word). Acronyms differ from initialism abbreviations, which are pronounced using their individual letters.

SNU is best described as a contraction of the interrogative sentence ("What is new?"). It commonly stands alone and may or may not be followed by a question mark.

Before the digital era, we might have just said "What's New?" or something like "What's Happening?" instead of using SNU.

Example of SNU Used in a Text