What Does SOY Mean?

SOY means "Shame On You."

The abbreviation SOY is used with the meaning "Shame On You" to indicate disapproval, disgust or distaste at something that someone has just written. For example: SOY expresses disgust or distaste in the same way as the expressions "Ack!" and "Eww!".

When I write SOY, I mean this: 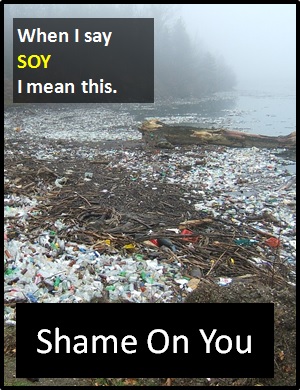 "Shame On You" for polluting our oceans.

An Academic Look at SOY

As it is pronounced using its individual letters (i.e., "Ess Oh Why"), SOY is classified as an initialism abbreviation. Initialisms are different to acronyms, which are spoken like words.

SOY is typically used as a standalone declarative sentence (i.e., a statement). It is not normally used as another part of speech within a wider sentence.

Example of SOY Used in a Text