What Does STR Mean?

The abbreviation STR is widely used in text-based conversations as a request to exchange pictures.

"Send To Receive" is also abbreviated as S2R.

STR is also used on online dating sites and in personal advertisements to make it clear that someone is not looking for serious, long term commitment in a relationship.

When I write STR, I mean this: 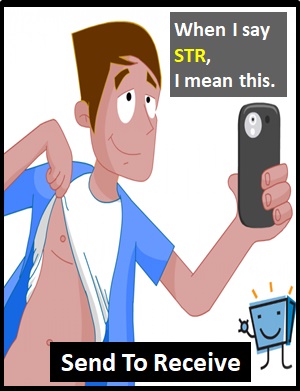 STR also means "Short Term Relationship." This is the most common definition for STR on online dating sites, such as Craigslist, Tinder, Zoosk and Match.com, as well as in texts and on chat forums.

Examples of STR in Sentences

Here are examples of STR being used in conversations:

An Academic Look at STR

As it is pronounced using its individual letters (i.e., "Ess Tee Arr"), STR is classified as an initialism abbreviation. Initialisms are different to acronyms, which are spoken like words.

The abbreviation STR was used with the meaning "Short Term Relationship" long before the digital era.

Example of STR Used in a Text

FLOSS (To Show Off) GIG (Live Show) NCNS (No Call, No Show) NFSW (Not For Showing To The Wife)