SWIDT is typically used to draw attention to something funny or clever that someone has just said, especially when they have made a play on words or a clever link between two subjects.

When I write SWIDT, I mean this: 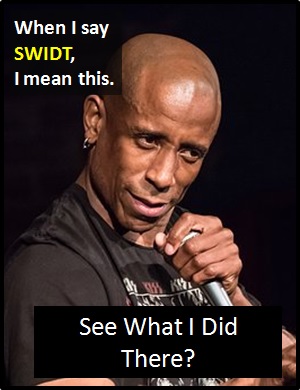 SWIDT makes sure everyone has got it.

Examples of SWIDT in Sentences

Here are examples of SWIDT being used in conversations:

An Academic Look at SWIDT

SWIDT plays the role of an interrogative sentence (i.e., a question), but it is commonly seen without a question mark. In other words, it can be written "SWIDT?" or "SWIDT".

As it is pronounced using its individual letters (i.e., "Ess Dublyoo Eye Dee Tee"), SWIDT is classified as an initialism abbreviation. Initialisms are different to acronyms, which are spoken like words.

Before the digital era, we might have just said "See What I Did There" instead of using SWIDT.

Example of SWIDT Used in a Text