TGFT means "Thank God for That!". The abbreviation TGFT is most commonly used as an exclamation to express relief that a difficult or dangerous situation has been passed with a happy outcome rather than a negative one. It demonstrates giving thanks for good fortune rather than having any religious connotation.

When I write TGFT, I mean this: 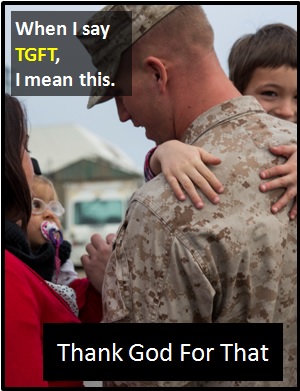 TGFT (That God For That!) can be used to expresses relief that danger has passed.

Examples of TGFT in Sentences

Here are examples of TGFT being used in conversations:

An Academic Look at TGFT

TGFT is an initialism abbreviation. This means it is pronounced using its individual letters (i.e., Tee Gee Eff Tee), but as this is harder to say than "Thank God for that" it is not often expressed using its letters. In other words, the abbreviation TGFT is for efficiency in writing and not efficiency in speech.

TGFT is also an interjection (i.e., it is not grammatically related to any other part of the sentence). It is included in a sentence to express relief. For example:

Example of TGFT Used in a Text