What Does TITT Mean?

TITT means "Throw In The Towel."

The abbreviation TITT is used with the meaning "Throw In The Towel" as an admission of defeat.

The phrase "Throw In The Towel" originates from boxing matches, where a member of a fighter's support team throws a towel into the ring to signal that the fighter is unable or unwilling to continue with the contest. The phrase is now widely used in conversation and print with the meaning "to surrender," "give up," or "give in."

In this video, a boxing coach "Throws In The Towel" to save his fighter from further punishment:

When I write TITT, I mean this: 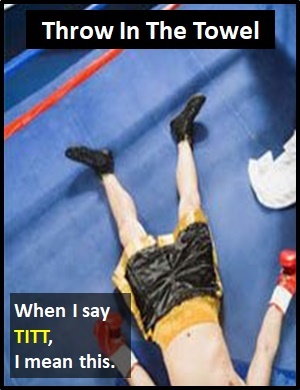 TITT and give up.

Examples of TITT in Sentences

Here are examples of TITT being used in conversations:

An Academic Look at TITT

As it is pronounced using its individual letters (i.e.,"Tee Eye Tee Tee"), TITT is classified as an initialism abbreviation.

Although the phrase "Throw In The Towel" is literal in origin, in normal use it is an idiom. An idiom is a commonly used expression whose meaning does not relate to the literal meaning of its words. Other examples of idioms are:

(To have an axe to grind means to have a dispute with someone.) (To let sleeping dogs lie means to avoid restarting an argument or conflict.)

Before the digital era, we would have just said "Throw In The Towel" instead of using the abbreviation TITT.

Example of TITT Used in a Text