ion TROLL | What Does TROLL Mean?

What Does TROLL Mean?

A TROLL is a "Deliberately Disruptive Online Commentator."

An internet TROLL is a person who posts deliberately provocative messages online, in message forums or on social media, with the intention of provoking an emotive response from other users and disrupting a conversation. TROLLs typically post inflammatory or off-topic comments, which can range from light-hearted joking to serious bullying and harassment. TROLLS usually post anonymously.

If a troll contributes anything meaningful to a discussion it is purely by accident and indicates a lack of TROLLING expertise.

The term TROLL almost certainly comes from the mythical Scandinavian creatures of the same name, which are famed for being dumb, unfriendly and brutish.

When I write TROLL, I mean this: 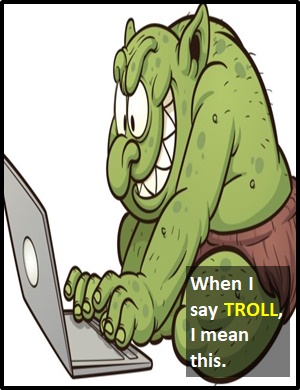 Examples of TROLL in Sentences

Here are examples of TROLL being used in conversations:

An Academic Look at TROLL

Before the digital era, TROLLs would probably have been known as "stirrers," or even "bullies."

Example of TROLL Used in a Text