A TWITTER STORM is a message on Twitter that attracts a very significant amount of attention from other Twitter users. When a tweet and hashtag are tweeted and retweeted quickly enough, the topic is included on Twitter's "trending" list and displayed to all Twitter users, even those who are not followers of the original poster. This often leads to the original tweet crossing to other social media sites and the mainstream media.

A TWITTER STORM is usually a natural phenomenon, driven by a tweet that captures the public imagination. However, as it is such an effective way to quickly spread an idea or opinion, many advertisers and organizations try to provoke a TWITTER STORM in order to gain publicity.

According to a 2011 report by Precise, a UK-based business information monitoring group, there are three types of TWITTER STORM: 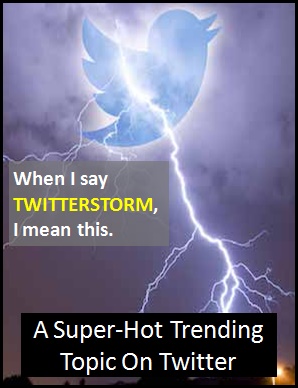 TWITTER STORMs are not always provoked by bad news.

Here's an example of TWITTER STORM being used in conversation: