What Does WYS Mean?

The abbreviation WYS means "Whatever You Say," "What You Said," "What You Saying?" or "What's Your Status?" Here's more information about each of these definitions of WYS.

WYS is widely used with the meaning "Whatever You Say," as a response to something that someone has said. Although WYS can imply agreement, it is more often used sarcastically and condescendingly.

The phrase "Whatever You Say" (and the abbreviation WYS) went viral in March 2020, when TikTok user Neekolul posted a video featuring her lip syncing to the song "Oki Doki Boomer" while wearing a Bernie 2020 t-shirt:

WYS is also commonly used with the meaning "What You Said" to express agreement with something that has been said or written. In this context, it can usually be translated as "Pretend I said the same as what you said."

WYS is one of many of abbreviations commonly used to express agreement. Others include:

In gaming circles, WYS (with or without a question mark) usually means "What's Your Status?" It represents a request for a situation update about a player's character.

When I write WYS, I mean this: 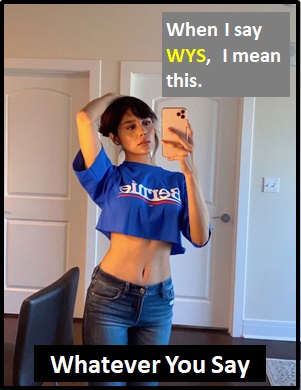 "What You Said" is another common definition for WYS.

"What You Saying?" is normally the most common definition for WYS when it is followed by a question mark.

"What's Your Status?" is the most common definition for WYS on gaming apps, such as Telegram and Discord.

Examples of WYS in Sentences

Here are examples of WYS being used in conversations:


(Here, WYS means "Whatever You Say" and expresses condescension.)


(Here, WYS means "What You Said" and expresses agreement.)

An Academic Look at WYS

As it is pronounced using its individual letters (i.e., "Dblyoo Why Ess"), WYS is classified as an initialism abbreviation. Initialisms are different to acronyms, which are spoken like words.

Example of WYS Used in a Text

SED (said) WHS (what he said) WTBS (with that being said)