What Does YEET Mean?

YEET is an exclamation of excitement. YEET also means "throw," "chuck," or "dump." It was also a viral dance move.

Here is more information about each of these definitions of YEET, with examples of use.

The term YEET seems to have originated as an exclamation of excitement, similar to expressions such as "yee haw!", "yay!" and "yes!" For example:

In 2014, a stylized dance called YEET went viral on YOUTUBE and, over the next few years, a number of videos picked up millions of views.

As can be seen in this video of vines from 2018, as well as the dance move, YEET was firmly established as an exclamation of excitement, especially when associated with the throwing of objects: YEET eventually became a synonym for the word "throw," especially slang synonyms of "throw," such as "chuck," "pass," and "dump." For example:

When I write YEET, I mean this: 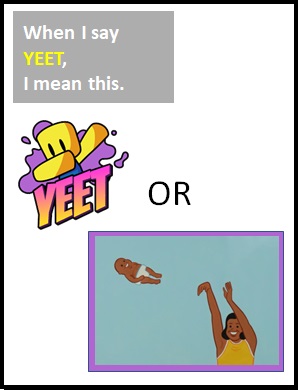 YEET is an exclamation of excitement, a dance, and can mean "throw."

Summary of Key Points for First Definition of YEET

"Throw" is another common definition of YEET.

YEET is also a dance.

An Academic Look at YEET

YEET is typically used as an interjection. An interjection is not grammatically related to any other part of the sentence. It is included in a sentence to express a sentiment such as surprise, disgust, joy, excitement, or enthusiasm. For example:

Example of YEET Used in a Text