The word YOUTHQUAKE was first coined in 1965 by Vogue editor Diana Vreeland, who used it to describe sudden changes in fashion, music and attitudes driven by a new generation of young adults. It sprang to prominence in the UK in 2017, as a descriptor of the impact of the country's young people on the general election held in June of that year, when the labour party achieved a better-than-expected result for reasons that included a large turnout by young voters.

YOUTHQUAKE is also the title of an album by the British pop group Dead or Alive, released in May 1985. The album included the single "You Spin Me Round (Like a Record)", which was a UK number-one hit and reached the top 20 in the US.

When I write YOUTHQUAKE, I mean this: 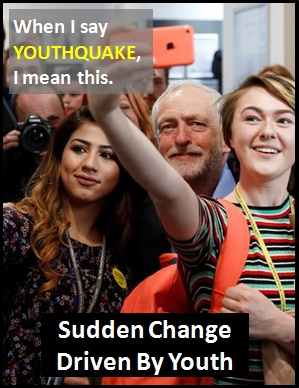 Examples of YOUTHQUAKE in Sentences

Here are examples of YOUTHQUAKE being used in conversations:

An Academic Look at YOUTHQUAKE

In 2017, YOUTHQUAKE was declared the word of the year by Oxford Dictionaries.

YOUTHQUAKE is a portmanteau word, i.e., a word that is formed by merging two words. YOUTHQUAKE is an amalgam of the words Youth and Earthquake.

YOUTHQUAKE existed before the digital era. It has been used with the meaning means "Sudden Change Driven By Youth" since at least 1965.

Example of YOUTHQUAKE Used in a Text