What Does YWCA Mean?

YWCA means "Young Women's Christian Association. YWCA is a global organization which aims to advance the empowerment, rights leadership and of women, young women and girls in over 120 countries. YWCA membership is drawn from many different faiths, backgrounds, ages and cultures.

Although YWCA is widely associated with hostels and fitness centres, its primary function is human-rights advocacy with an emphasis on gender equality.

Currently, the YWCA's primary objective is to enable its membership of 100 million young women and girls to "transform power structures to create justice, gender equality and a world without violence and war, leading a sustainable YWCA movement inclusive of all women by 2035." The YWCA is not a part of the YMCA. However, many local and YWCA associations have merged, providing the programs of each to their members

When I write YWCA, I mean this: 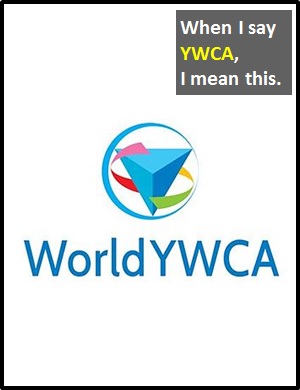 The YWCA is a global advocacy organization for young women.

Examples of YWCA in Sentences

Here are examples of YWCA being used in conversations:

An Academic Look at YWCA

YWCA is an initialism abbreviation. This means it is pronounced using its individual letters (i.e., Wye Dublyu See Aye). Initialisms contrast with acronyms, which are spoken like words.

Example of YWCA Used in a Text