The number 187 (pronounced "one-eight-seven" or "one eighty-seven") is used as a synonym for the word "Murder." It refers to Section 187 of the California Penal Code, which defines the crime of murder. Because of this connection to homicide, 187 features prominently in gang culture, music, and even mainstream movies. For example: 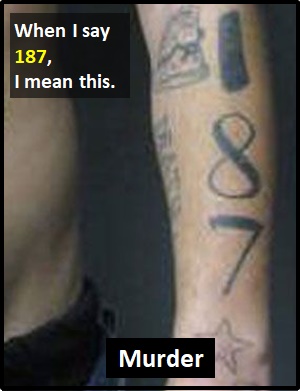 Section 187 of the California Penal Code relates to "Murder."

Examples of 187 in Sentences

Here are examples of 187 being used in conversations:

187 is classified as a cyber term (as opposed to an initialism abbreviation or an acronym). Initially, cyber term terms were introduced for brevity, but, particularly with the advent of predictive texting and on-screen keyboards, they are now mostly employed for fun. Cyber terms differ from icons because they are not pictorial representations.

Before the digital era, we would have just said "Murder" instead of using 187.

187
Help Us To Improve Cyber Definitions
Please tell us using this form.