182 is a cyber term which is typically used with the meaning "I Hate You" to express feelings of intense dislike. However, 182 can also be used ironically. In such cases it is often used in response to someone's good fortune, expressing good-natured jealousy rather than actual dislike. For example:

Other ways of saying "I Hate You" include: 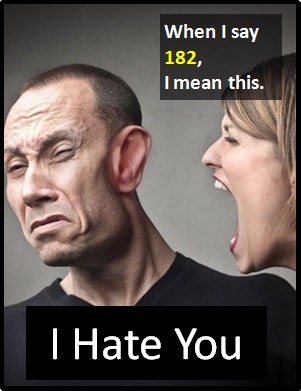 182 may also be used ironically.

Examples of 182 in Sentences

Here are examples of 182 being used in conversations:

182 is defined as a cyber term, because some of its characters are used as substitutes for letters. Most cyber terms were introduced to reduce the number of key strokes required to write the word, but since the arrival of predictive texting and keyboards on mobile devices, this efficiency is no longer required. Nevertheless, cyber terms are still regularly used to make messages more entertaining or to express individuality.

Cyber terms differ from emoticons because they are not pictorial representations.

"I Hate You" is typically used as a standalone declarative sentence. It is not often used as another part of speech within a wider sentence.

Before the digital era, we would have just said "I Hate You" or something like "I Really Don't Like You" instead of using 182.

182
Help Us To Improve Cyber Definitions
Please tell us using this form.

New ways to say I love you Digital Dating Abbreviations, Acronyms & Slang Terms how to spot internet grooming420 (time to smoke cannabis) gnoc (get naked on camera) iwsn (I want sex now) mos (mum over shoulder) nifoc (naked in front of computer / camera) ru18 (are you 18?) tdtm (talk dirty to me) wyrn (what's your real name?)