8) means "Cool." It is an emoticon showing sunglasses and a smile. (NB: Emoticons differ from emojis, which are small digital images or icons used to express ideas or emotions.)

Emoticons often resemble a human expression. With 8) the expression it not immediately obvious because the sunglasses are not instantly apparent. Other emoticons are clearer, for example :( (sad face) and ;) (wink). denotes a wink.

The term "cool" describes a person who is relaxed, confident and fashionable. It can also mean that someone is okay with a situation (e.g., He was cool with having to get the bus home.) The term "cool" is associated with the youth culture of the 1950s and 1960s. 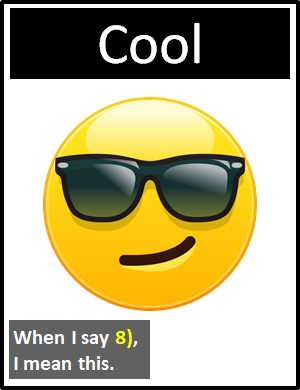 Examples of 8) in Sentences

Here are examples of 8) being used in conversations:

An Academic Look at 8)

8) is classified as a cyber term as opposed to an initialism abbreviation or an acronym. Initially, cyber term terms were introduced for brevity, but, particularly with the advent of predictive texting and on-screen keyboards, they are now mostly employed for fun. Cyber terms differ from icons because they are not pictorial representations.

8) is typically used as an adjective (i.e., a describing word). For example:

Before the digital era, we would just have said "cool" or "okay" instead of 8).

Example of 8) Used in a Text