86 means "To get rid of something." Broadly speaking, it means to end the use of, to take something out, or to throw it away. It is thought to have derived from a New York speakeasy (an illegal drinking den during the time of prohibition) called Chumley's located at 86, Bedford Street. Chumley's had an interior adjoining courtyard, which provided customers with privacy when arriving or leaving the building.

At that time, it was not unusual for the police to be on the payroll of the bar, and they would forewarn them of imminent police raids. The bartender would then issue the command "86 everybody," which was a sign for people to leave via the 86 Bedford Street entrance to avoid the police, who would arrive through the adjoining courtyard door, hoping to surprise the customers.

It is also used in the restaurant trade, when an item on the menu is no longer available, e.g., "86 the Shepherd's Pie."

Today, it is most likely to be used in dating terms, meaning to get rid of someone, or to indicate that you've been 86ed, i.e., dumped. 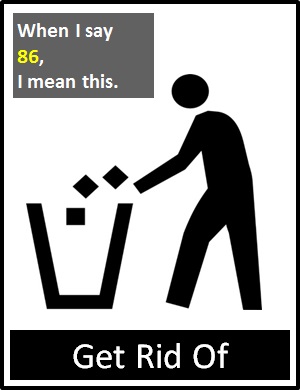 86 means to get rid of something.

Examples of 86 in Sentences

Here are examples of 86 being used in conversations:

An Academic Look at 86

86 is classified as a cyber term as opposed to an initialism abbreviation or an acronym. Initially, cyber term terms were introduced for brevity, but, particularly with the advent of predictive texting and on-screen keyboards, they are now mostly employed for fun. Cyber terms differ from icons because they are not pictorial representations.

It can also be used as an imperative verb (i.e., an order). For example:

Example of 86 Used in a Text