What Does AFP Mean?

AFP means "Away from Phone." The abbreviation AFP is typically used to indicate that the sender will not be able to answer calls or messages for a while. AFP is typically sent in anticipation of not being able to respond to contact, for example, just before entering a meeting or an area where the use of phones is not allowed. However, AFP may also be sent when someone receives a call or message that they are unable to answer .

Other common definitions of AFP are:

When I write AFP, I mean this: 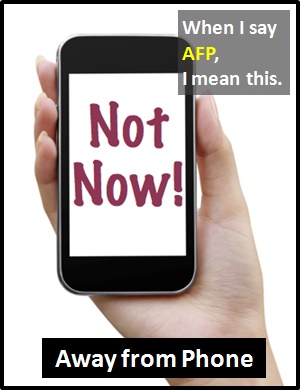 Examples of AFP in Sentences

Here are examples of AFP being used in conversations:

An Academic Look at AFP

AFP is an initialism abbreviation. This means it is pronounced using its individual letters (i.e., "Ay Eff Pee"). (Of note, initialisms contrast with acronyms, which are spoken like words.)

Technically, AFP is an adverb of place, but it most often used like a standalone declarative sentence (i.e., a statement), which translates best as "I am away from the phone."

Example of AFP Used in a Text