What Does AFC Mean?

AFC means "Average Frustrated Chump," which is a term coined in 2007 by Erik von Markovik in his book "The Mystery Method." An AFC is a man who always seems to end up as "just good friends" with women because of his extreme pliability in dealing with them. The irony for an AFC is that by doing all the things he thinks women want – listening, understanding, agreeing, comforting – he inadvertently alienates himself from any possibility of a sexual relationship.

The term "Beta Male" (inferior to Alpha Male") has the same meaning.

In the online realm, the abbreviation AFC also typically means "Away From Computer." This indicates that a user is not at their console or PC.

When I write AFC, I mean this: 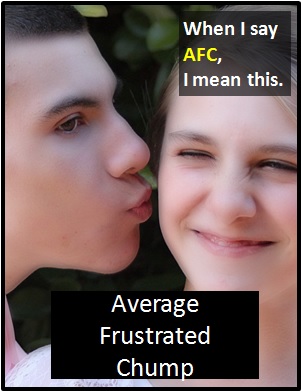 Examples of AFC in Sentences

Here are examples of AFC being used in conversations:

An Academic Look at AFC

AFC is a noun phrase (a group of words which play the role of a single noun).

Of note, as it is pronounced using its individual letters (i.e., "Aay Eff Cee"), AFC is classified as an initialism abbreviation. Initialisms are different to acronyms, which are spoken like words.

Before the digital era, we might have said something like "Beta Male" or "Metrosexual" instead of using the abbreviation AFC.

Example of AFC Used in a Text

AFC
Help Us To Improve Cyber Definitions
Please tell us using this form.