What Does And I Oop Mean?

And I Oop is an "Expression of Shock, Surprise or Embarrassment."

The phrase "And I Oop" is typically used by VSCO Girls, as an expression of shock, surprise or embarrassment. "And I Oop" originated on YouTube in October 2015, in a video by the drag queen Jasmine Masters. In the video, Masters is complaining about friends who can't handle their alcohol when, with a pained expression, she suddenly exclaims "And I Oop!" Masters then explains "I just hit my balls."

Since the video by Masters went viral, "And I Oop" has become a favorite catchphrase of VSCO Girls and is widely used by them to express shock, surprise or embarrassment (either feigned or genuine).

Here's a remix of the famous moment when Jasmine Masters first coined the phrase "And I Oop!":

AND I OOP (TRAP REMIX)

"Expression of Shock, Surprise or Embarrassment" is the most common definition for And I Oop on Snapchat, WhatsApp, Facebook, Twitter, and Instagram. Here is some more information about And I Oop:

Image for And I Oop

When I write And I Oop, I mean this: 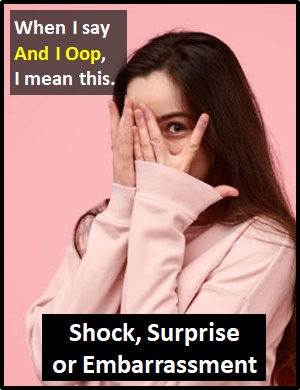 And I Oop is a phrase much favored by VSCO Girls.

Examples of And I Oop in Sentences

Here's an example of And I Oop being used in conversation:

An Academic Look at And I Oop

Before Jasmine Masters first coined the phrase And I Oop, we would probably have just said something like "oops!".

Example of And I Oop Used in a Text

And I Oop
Help Us To Improve Cyber Definitions
Please tell us using this form.