What Does VSCO Girl Mean?

The term VSCO Girl (pronounced "Visko Girl") is a trend amongst teen and pre-teen girls. The trend is named after the VSCO app, which is a photo editing and sharing app. VSCO Girls emerged in 2019. They are noted for their dedication to certain styles and brands, including scrunchies, over-sized T-shirts, Pura Vida bracelets, Puka shell necklaces, Crocs, Vans and Kanken backpacks.

VSCO Girls are also noted for being environmentally conscious. In the name of "sustainability," they use products such as metal straws and Hydro Flasks. (A popular conservation theme and catchphrase for VSCO Girls is "Save the turtles.")

The VSCO Girl image has inspired many parody videos on platforms such as YouTube and TikTok, often based around their catchphrases, such as "Save the turtles," And I Oop and SKSKSK.

For a more detailed explanation of VSCO girls, check out this video from Anthony Padilla:

When I write VSCO Girl, I mean this: 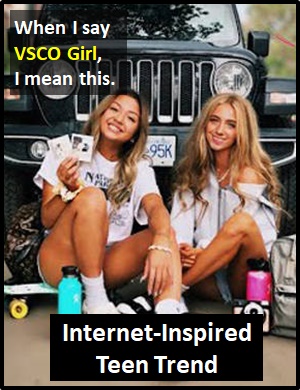 "Internet-Inspired Teen Trend" is the most common definition for VSCO Girl on Snapchat, WhatsApp, Facebook, Twitter, and Instagram. Here is some more information about VSCO Girl:

Example of VSCO Girl Used in a Text