What Does ANS Mean?

ANS means "Answer." ANS is a contraction which is typically used in text speak to mean "Answer."

ANS is also an abbreviation for "Autonomic Nervous System," which is the part of the nervous system responsible for control of the bodily functions not consciously directed, such as breathing, the heartbeat, and digestive processes.

When I write ANS, I mean this: 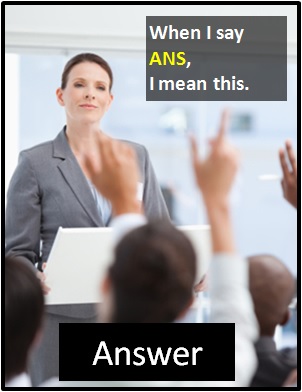 Examples of ANS in Sentences

Here are examples of ANS being used in conversations and jokes:

An Academic Look at ANS

Before the digital era, we would have just said "Answer" instead of using the abbreviation ANS.

Example of ANS Used in a Text