What Does ANTIFA Mean?

ANTIFA is a left-wing, anti-fascist and anti-racist political movement. Born out of resistance to Mussolini and Hitler in Europe during the 1920s and '30s, it is a loose movement of activists who use both violent and nonviolent direct action to achieve shared aims.

ANTIFA returned to the headlines in the United States in 2016, amid opposition to the Trump administration and the alt-right. Since the election of Donald Trump, activists who align with ANTIFA have mounted campaigns in support of minority rights and other social justice issues.

You now know what ANTIFA means, but are you good at Cyber Speak? Well, let's see!

When I write ANTIFA, I mean this: 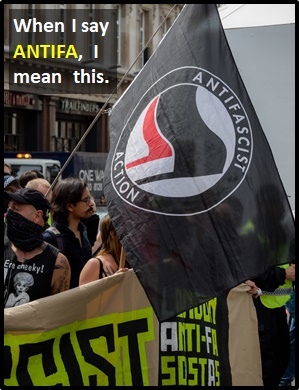 ANTIFA is an anti-fascist and anti-racist political movement.

Example of ANTIFA Used in a Text