What Does AQAP Mean?

AQAP means "As Quickly As Possible." Use of the abbreviation AQAP indicates that the sender wishes something to be done without delay.

AQAP can be considered an alternative to the more well-known abbreviation ASAP, the use of which is now considered by many people to be very clichéd.

The abbreviation AQAP can also be written as QAP ("Quickly As Possible").

The abbreviation AQAP also refers to the terrorist group "Al-Qaeda in the Arabian Peninsula."

When I write AQAP, I mean this: 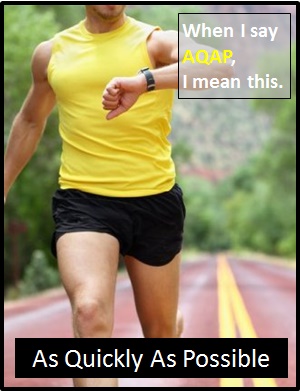 "As Quickly As Possible"

Examples of AQAP in Sentences

Here are examples of AQAP being used in conversations:

An Academic Look at AQAP

AQAP is classified as an adverb (more specifically, an adverb of time).

The abbreviation AQAP is pronounced using its individual letters (i.e., "Eh Kyoo Eh Pee"); therefore, it is classed as an initialism abbreviation. Initialisms are different to acronyms, which are spoken like words.

Before the digital era, we might have said "ASAP" ("As Soon As Possible") instead of the abbreviation AQAP.

Example of AQAP Used in a Text