What Does ASAP Mean?

ASAP is thought to have originated with the US military in the 20th century. It is now very commonly used in everyday speech, both face-to-face and in test-based communications.

Due to overuse, ASAP is now considered outdated in some circles. Its use should probably be avoided in business communications.

Here's a short video explaining how to use ASAP:

When I write ASAP, I mean this: 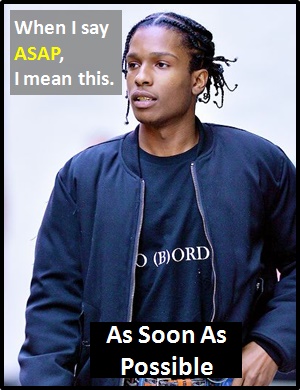 Rakim Mayers is ASAP Rocky of the ASAP Mob

Examples of ASAP in Sentences

Here are examples of ASAP being used in conversations:

An Academic Look at ASAP

ASAP is both an acronym and an initialism abbreviation. It is typically spoken like a word (i.e., "Ay-sap"), but is also often pronounced using its individual letters (i.e., "Ay Ess Ay Pee").

Before the digital era, we would have just said something like "As Soon As Possible" instead of using ASAP.

Example of ASAP Used in a Text