What Does ASAS Mean?

ASAS is typically used in response to the use of ASAP ("As Soon As Possible") to make it clear that a task is not of the highest priority and that it should or will receive attention in due course. It is similar in meaning to ASAIC ("As Soon As I Can") and ASAYC ("As Soon As You Can").

When I write ASAS, I mean this: 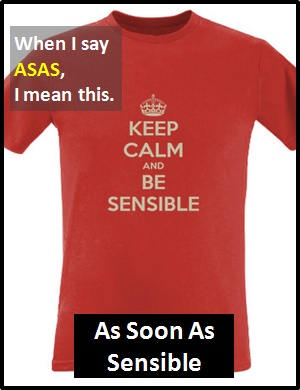 ASAS is often a reminder not to rush.

Examples of ASAS in Sentences

Here are examples of ASAS being used in conversations:

An Academic Look at ASAS

ASAS is an acronym (i.e., an abbreviation spoken like a word). It is pronounced "Ay-sas." Acronyms differ from initialism abbreviations, which are pronounced using their individual letters.

Before the digital era, we would have just said something like "As Soon As I Can" or "As Soon As Sensible" instead of using ASAS.

Example of ASAS Used in a Text