What Does BBY Mean?

The abbreviation BBY is typically used with the meaning "Baby," as a slang term of endearment between couples. It is most often used in texts and on Instagram. Although less common, BBY is also used among young teenagers to ridicule or humiliate one another.

According to Urban Dictionary, BBY can also refer to the titular character of the 2017 animated film Boss Baby.

(Of some interest, together with the words "Home," "Money," and "Love," "Baby," is one of the most repeated words in song lyrics.)

When I write BBY, I mean this: 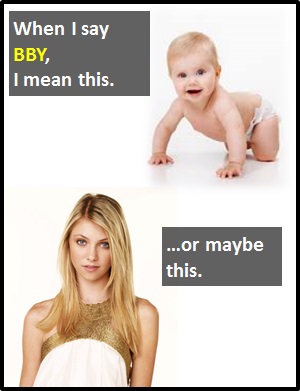 BBY (baby) can be used literally or figuratively.

Examples of BBY in Sentences

Here are examples of BBY being used in conversations:

An Academic Look at BBY

Before the digital era, we might have just said "Baby" or something like "Sweetheart" instead of using BBY as a term of endearment.

Example of BBY Used in a Text