BFAB means "Back For A Bit."

When I write BFAB, I mean this: 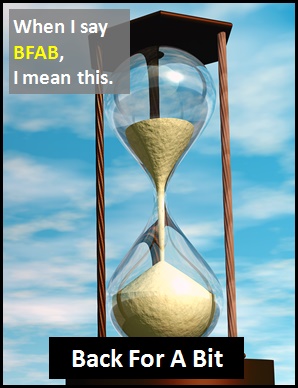 BFAB, but will have to dash soon!

Examples of BFAB in Sentences

Here are examples of BFAB being used in conversations:

An Academic Look at BFAB

"Back For A Bit" is a colloquial phrase, i.e., informal language or common parlance which is usually employed in informal situations by native speakers.

BFAB is an initialism abbreviation. This means it is pronounced using its individual letters (i.e., "Bee Eff Ay Bee"). Initialisms contrast with acronyms, which are spoken like words.

Before the digital era, we might have said something like "I'm back, but not for long" or even just "Back For A Bit," instead of using BFAB.

Example of BFAB Used in a Text