What Does BM Mean?

The abbreviation BM is most often used with the meanings "Black Man," "Baby Mama," and "Bad Mannered." However, it is also sometimes used to mean "Bowel Movement" and "BMW." Here's a little more information about each of these definitions of BM. (Examples of use can also be found below.)

BM is used on dating sites (such as Craigslist, Tinder, Zoosk and Match.com), with the meaning "Black Man" to indicate that a user is, or is looking to make contact with, a black male.

BM is also used with the meaning "Baby Mama" (or sometimes "Baby Mother" or "Baby Mummy"), to refer to a woman who is not married to or in a significant relationship with her child's father. (See also BD (Baby Daddy)).

BM is also used with the meaning "Bad Mannered." In this context, it is most often used in gaming circles (e.g., on apps such as Discord or Telegram) to complain about a lack of courtesy shown by someone.

BM is sometimes used to mean "Bowel Movement." The origins of the use of BM in this context are unclear, but it was popularized in an episode of the animated series Family Guy (series 3, episode 14), in a conversation between father and son, Peter and Chris: You can view this entire episode of family Guy at Dailymotion. (No pun intended!)

BM is also sometimes used as a spoken abbreviation, to refer to the German car maker BMW.

When I write BM, I mean this: 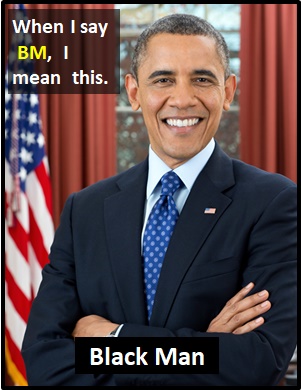 "Black Man" is the most common meaning for BM on online dating sites, such as Craigslist, Tinder, Zoosk and Match.com, as well as in texts and on chat forums.

"Baby Mama" is another common definition for BM.

"Bad Mannered" is another common definition for BM, especially on gaming apps, such as Discord and Telegram.

Examples of BM in Sentences

Here are examples of BM being used in conversations:

An Academic Look at BM

As it is pronounced using its individual letters (i.e., "Bee Emm"), BM is classified as an initialism abbreviation. Initialisms are different to acronyms, which are spoken like words.

Before the digital era, we would probably have just said "Black Man," "Baby Mama," "Bad Mannered," or "Bowel Movement" instead of using the abbreviation BM.

Example of BM Used in a Text