What Does BR Mean?

BR means "Best Regards." The abbreviation BR, meaning "Best Regards," is most commonly used to wrap up online or text-based conversations. It is used in its literal sense, i.e., there is no connotation. BR literally means "I wish you my best regards."

Of note, "Best Regards" is also often abbreviated as BRGDS and as BEST.

Other meanings of the abbreviation BR include:

When I write BR, I mean this: 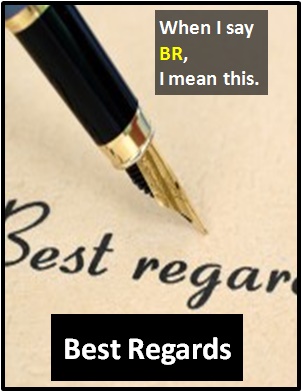 Examples of BR in Sentences

Here's an example of BR being used in a joke with the meaning "Best Regards":

An Academic Look at BR

Before the digital era, we might have just said something like "Regards" or "Best Regards" instead of using the abbreviation BR.

Example of BR Used in a Text