What Does BTS Biot Mean?

BTS Biot is an offensive term used as a childish insult to describe the Korean boy band BTS. The word biot is a derogatory term that means "gay" in Filipino. Biot is as offensive and childish in Filipino as gay is in English when used as an insult. For example: In late 2021, BTS Biot trended strongly on social media as a form of attack against BTS's fans, known as the Army.

BTS Biot is sometimes expanded to "BTS Biot Talaga Sila," which means "BTS gay, they really are." Obviously, this expansion is designed to fit the letters of the abbreviation BTS, which actually stands for "Bang Tan Sonyeondan" (Bulletproof Boy Scouts).

We became aware of this term, when an anti-Army troll posted a comment on our BTS video. The comment was immediately removed, and the poster was blocked and reported.

The word biot is so offensive, Google translate will not offer a translation.

When I write BTS Biot, I mean this: 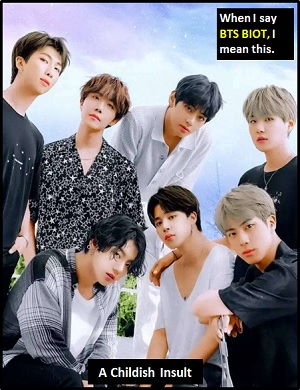 BTS Biot is a childish insult in Filipino.

Here's a short video explaining how to use BTS:

Example of BTS Biot Used in a Text