BYE, FELICIA is a dismissive way of saying goodbye.

"Bye, Felicia" is a slang term that is used as a dismissive goodbye. It was first heard in the hit 1995 comedy movie Friday, starring Ice Cube. The term was used by Cube's character, Craig, when he told the sister of his love interest to go home by saying "Bye, Felicia." The term immediately became popular as a way of dismissing anyone who is annoying or irritating.

The use of "Bye, Felicia" as a dismissive way of saying goodbye, ebbed and flowed in popularity, until it returned to the spotlight in the 2015 film Straight Outta Compton. In the movie, "Bye, Felicia" was said by the actor O’Shea Jackson Jr (who is actually the son of Ice Cube and who was playing the role of Ice Cube).

In December 2017, "Bye, Felicia" exploded into the spotlight, when ABC TV newscaster Robin Roberts used it after commenting on an interview with Omarosa Manigault, who had just left her role at the Trump administration.


The scene from the movie Friday.

When I write BYE, FELICIA, I mean this: 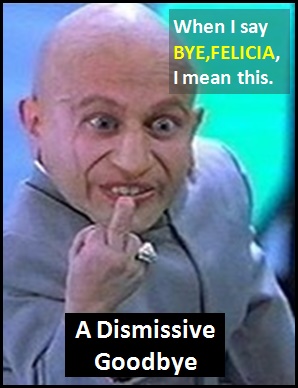 BYE, FELICIA is the verbal equivalent of "Flipping the bird."

Examples of BYE, FELICIA in Sentences

Here are examples of BYE, FELICIA being used in conversations:

An Academic Look at BYE, FELICIA

BYE, FELICIA is a slang phrase. Slang refers to words, phrases and uses of language that are regarded as very informal and which are often restricted to a special context or a particular group of users.

As BYE, FELICIA is used to address someone by name, it is in the vocative case. This is shown by offsetting FELICIA with a comma.

Before the digital era, we might have said something like "Yeah, Right," or "Get lost" instead of using BYE, FELICIA.

Example of BYE, FELICIA Used in a Text

BUZZ OFF (to go away) EAT MY SHORTS OFF (rude dismissal or rebuke) GJOAC (go jump off a cliff) KTHNXBI (okay, thanks, bye) PEACE OUT (goodbye)