What Does CATFISH Mean?

Of note, the scope of the term CATFISH is steadily expanding. The term is increasingly used to denote any false online persona (i.e., not expressly for the purpose of luring someone into a relationship). For example, someone trolling an internet chat forum using a false persona might also be called a CATFISH. (A person using a false identity is also called a SOCKPUPPET.)

When I write CATFISH, I mean this: 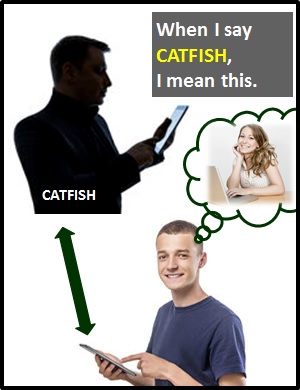 A CATFISH is a fake online persona.

Examples of CATFISH in Sentences

Here are examples of CATFISH being used in conversations:

An Academic Look at CATFISH

CATFISH is a word which is employed as slang word. (Slang refers to words, phrases and uses of language that are regarded as very informal and which are often restricted to a special context or a particular group of users.)

CATFISH can be used as a noun or a transitive verb. For example:

(Here, CATFISH is a verb. Note that it is transitive; i.e., it can take a direct object (here, John).)

Example of CATFISH Used in a Text