What Does CAUGHT IN 4K Mean?

The expression "caught in 4K" originally meant that someone had been caught on video doing something they shouldn't have. It may well not have been 4K very high-definition video, but the implication was that there was irrefutable proof of what they had said or done.

The meaning of "caught in 4K" has since expanded to include any situation in which someone has been caught red-handed, whether or not video evidence exists. For example: The expression "caught red-handed" probably comes from a murderer literally being caught with blood on their hands. It is now widely used to refer to anyone caught in the act of doing something they shouldn't be.

Image for CAUGHT IN 4K

When I write CAUGHT IN 4K, I mean this: 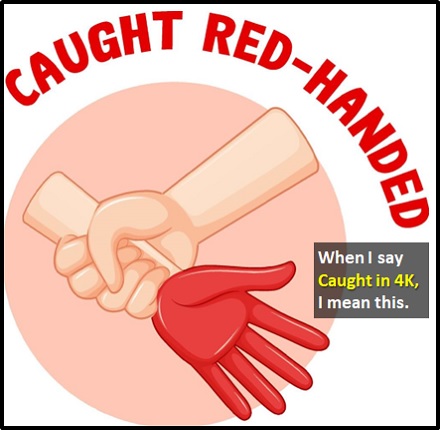 "Caught in 4K" doesn't need to mean that there is actually high-definition video evidence.

An Academic Look at CAUGHT IN 4K

"Caught in 4K" is an idiom; i.e., an expression whose meaning does not relate to the literal meaning of its words. Here are some other common idioms:

Before the digital era, we might have just said something like "caught red-handed" instead of "caught in 4K."

Example of CAUGHT IN 4K Used in a Text