CLWY means "Can't Live without You." The abbreviation CLWY is a very affectionate way of saying your love for someone is so strong, it would be impossible for you to survive with out them.

Used figuratively, CLWY is a sweet phrase of endearment, but it can also be used literally.(If you think these words are being used in their literal sense, tell somebody in authority.)

Of note, American electronica project Owl City recorded a song called "Can't Live Without You" in 2015.

When I write CLWY, I mean this: 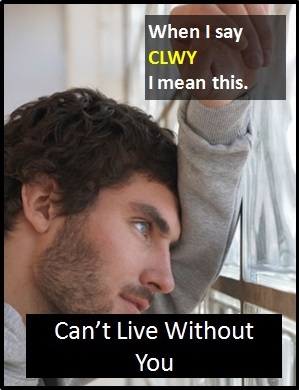 CLWY means "I can't live without you."

Examples of CLWY in Sentences

Here are examples of CLWY being used in conversations:

An Academic Look at CLWY

CLWY is used like a declarative sentence (i.e., a statement) with the meaning "I can't live without you."

Example of CLWY Used in a Text