CMHAHTD means "Cross My Heart And Hope To Die." The abbreviation CMHAHTD represents an oath made by making the sign of the cross over one's chest in order to demonstrate sincerity, reinforced by the claim that the sender would rather die than not tell the truth.

CMHAHTD is typically used to vouch for the veracity of a statement, e.g., "I will be back by 10 o´clock. CMHAHTD."

Of note, according to aperiodical.com, the saying "Cross My Heart And Hope To Die" featured in a poem during the concluding scenes of the "Lisa's Sax" episode of The Simpsons cartoon:

When I write CMHAHTD, I mean this: 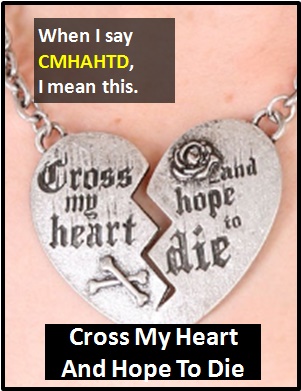 Examples of CMHAHTD in Sentences

Here is an example of CMHAHTD being used in a joke:

An Academic Look at CMHAHTD

Before the digital era, we might have said something like "I swear" or "I promise" instead of using the abbreviation CMHAHTD.

Example of CMHAHTD Used in a Text