What Does CMH Mean?

CMH means "Cross My Heart." The abbreviation CMH, which is a shortened version of CMHAHTD (Cross My Heart And Hope To Die), is an idiom to emphasize that what you've just said or promised is completely true and honest. It is commonly used by children wishing to communicate they are telling the truth; adults will use it informally for the same reason.

With origins in folklore, it most likely began as a religious oath based on the sign of the cross. In a face-to-face conversation, CMH is often accompanied by a hand gesture, drawing a cross over the heart.

Also of note, "Cross my Heart" was a track on the 1992 album "The Human Touch" by Bruce Springstein.

When I write CMH, I mean this: 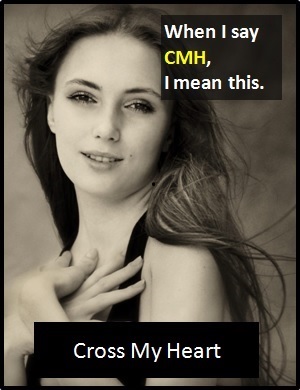 CMH describes a childhood action used to accentuate that you are telling the truth.

Examples of CMH in Sentences

Here are examples of CMH being used in conversations:

An Academic Look at CMH

CMH is an initialism abbreviation. Technically, this means it is pronounced using its individual letters (i.e., Cee Em Aich), but as this is harder to say than "Cross my heart," it is not often uttered using its letters. In other words, the abbreviation CMH is for efficiency in writing and not efficiency in speech.

CMH is used as a standalone declarative sentence (i.e., a statement). In other words, it is not used as another part of speech within a wider sentence.

Before the digital era, we might have said something like "cross my heart and hope to die" or "I promise I'm telling the truth" instead of CMH.
-->

Example of CMH Used in a Text