What Does CREEPYPASTA Mean?

Creepypastas are horror stories that are posted and shared online. They are typically user-generated, paranormal stories, which are intended to scare readers. They are a genre of copypasta.

Many writers of creepypasta base their stories on popular urban legends, many of which are inspired by traditional "campfire" stories, and others of which have been spawned online. They include gruesome tales of murder, suicide, zombies, aliens, and otherworldly occurrences. Most of the stories are short, but they can extend to lengthy, multi-part series that span multiple media types.

Creepypasta sprang to public attention in 2014, when two 12-year-old girls in Wisconsin (US) were charged with attempted murder after they lured a friend into the woods and stabbed her 19 times. The girls claimed they wanted to prove that the creepypasta character Slender Man was real.

When I write CREEPYPASTA, I mean this: 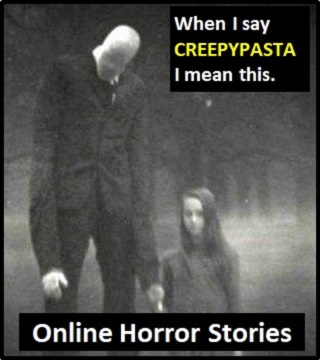 Slender Man is one of the most popular creepypasta characters.

An Academic Look at CREEPYPASTA

As it is formed by merging two words (or parts of words) into one, CREEPYPASTA is classified as a portmanteau word. It is formed by amalgamating creepy (as in "scary") and pasta (from "copypasta").

CREEPYPASTA can also be considered a neologism (i.e., a newly coined word or term which has emerged into everyday usage). Some neologisms are formally accepted into mainstream language (at which point, they cease to be neologisms), and some wither until they can longer be considered everyday terms. A neologism can be: Creepypasta is often pluralized simply by adding a letter "s," to make creepypastas. However, it can be considered a mass noun, so either form can be used as the plural. For example:

CREEPYPASTA is a child of the digital era.

Example of CREEPYPASTA Used in a Text