CUL8ER means "See You Later." CUL8ER is used to tell someone that you will see them again soon (without specifying exactly when). The term uses the sound of the number 8 to replace letters, making it efficient in terms of key strokes as well as fun. Other terms that make use of this efficiency include:

When I write CUL8ER, I mean this: 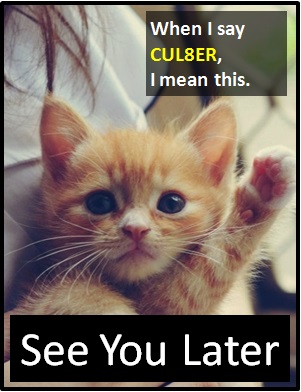 I can't wait to see you later.

Examples of CUL8ER in Sentences

Here are examples of CUL8ER being used in conversations:

An Academic Look at CUL8ER

CUL8ER is a declarative sentence (i.e., statement). In other words, it is not used as a part of speech in a wider sentence.

Of note, CUL8ER is not an acronym or an abbreviation. It is classified as a cyber term because it employs both letters and numbers. Initially, cyber term terms were introduced for brevity, but, particularly with the advent of predictive texting, they are now mostly employed for fun.

Before the digital era, we would have just have said something like "See You Later" instead of CUL8ER.

Example of CUL8ER Used in a Text

CUL8ER
Help Us To Improve Cyber Definitions
Please tell us using this form.